Films of the Week Vol. 3

This week brought a welcomed change to my habits of consuming movies. Previous weeks I’ve watched two or one films per a week. Guess I had some kind of bloating feeling about films after watching all the Oscar nominees in a very short period of time. But this week I went to cinema twice, first to see Warm Bodies and today again to see Pitch Perfect. Both of them proved that the comedy genre for young adults is doing very well at the moment. Besides those two I watched three other films.

I’ve seen this one when it was new. Back then it was ok-ish but now it was just bad. It’s unbelievable how Freddie Prince Jr. and Rachael Leigh Cook are able to have the exactly same emotions in their eyes in every scene. No anger, no sadness, no joy, just blandness. After watching the film I checked the other movies Prince Jr. has done and unfortunately I’ve seen most of them. At least the ones he made over 10 years ago. And he’s equally bad in all of them. Lucky for him that he’s married to one of the most ass-kicking women of all-time, Sarah Michelle Gellar. She’s All That made a surprisingly big amount of money back in 1999. Even the soundtrack of it sucks. Guess that tells a lot about the movies that were released just before the new millennium.

What a heartfelt film! I really liked this one. It was refreshing to laugh without any meanness or embarrassment in the laughter. The director Levine is establishing his place on the podium. He has this fresh way to look at things that makes the viewer feel fresh too. His previous films include for example All the Boys Love Mandy Lane and 50/50 and all of them have their own charm. The end of this film was a bit of a letdown but because the script and acting were otherwise well crafted, it didn’t matter really. And I don’t even like zombies but Nicholas Hoult and his friends are just engaging. And Teresa Palmer has unfortunate faith to look like Kristen Stewart but thankfully she’s much better at acting. 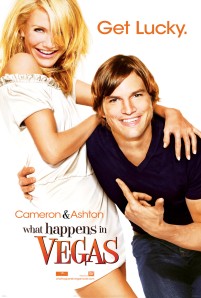 I’ve said before that I have my skeletons and one of them is that I love watching romantic comedies. The most of them are not good and whenever I saw one that is, I always write it down to my “to buy when cheap” –list that I have in IMDb. A better than average romantic comedy is a rare thing. This one for me is. I saw What Happen in Vegas back in then when it hit the cinemas and wrote it to my list. I hadn’t seen it since but I usually trust my previous opinion if it’s relatively new one (meaning I didn’t make it when I was a teenager, one should never trust one’s teenage opinions). I’m not a big fan of Cameron Diaz but in  this one she has nice chemistry with Kutcher and because the latter one is a sight for a sore eye, I don’t mind. I felt warm and fluffy in the end of the film and laughed enough during, so it has reach it’s goal as a romantic comedy.

I spend the weekend at my parents and decided before-hand that we could watch this one together on a Saturday night. The film had the C More opening night in Finland, so I thought maybe my parents haven’t seen it yet. I ended up watching it alone. Good for my parents because it wasn’t really a worth of anyone’s time. But because I usually tend to watch even the bad ones to the end, I did with this one too. I don’t really have anything good to say about it. Well, it happened in New York and I love New York. And Emily Blunt’s character had a nice bag in one scene. Otherwise it’s crap. Don’t waste your time.

I saw this few hours ago. And loved it! It’s so nice to realize that there are very good small comedies doing well in cinemas at the moment. And many of them are female lead. Pitch Perfect is about music; singing, making or playing it. The film has, if I remember correctly, two scenes that don’t have music as a background. And it works. And a cappella singing! Who would have thought it’s this fun? All the actors do good job, especially Rebel Wilson, who’s just fearless. And Anna Kendrick is getting better and better. She was already scene-stealing in Twilight and she has made a quite a career since then. She’s the one chick to watch. And do go see this film, it’s totally worth of your time, especially if you like singing, dancing and having fun while doing it. And I really need to watch The Breakfast Club again after this.

The next week I think I need to watch more manly films. Any suggestions?