Seems like my  promises are worth of nothing. The last week I promised to write two more posts during that week and I didn’t… But here we go with the first one.

Midnight Sun Film Festival is held in Sodankylä, Finland. And that’s in Lapland! About same the latitude as the northern parts of Alaska… It took me nine hours to get there by public transportation. And people just live there like we do here in “south”. “South” meaning that even my hometown is more above than Anchorage in Alaska. I don’t even know why we live here. But back to Sodankylä! So, it’s up there. Small, out of nowhere place, where people were the nicest I’ve met and the atmosphere so not like in Finland. And that’s a good thing. I always say that “only in Finland” in the meanest possible way because our government tends to forbid everything they can. But seems like only in Southern Finland we follow the law that much. When there’s 130 km between the towns, guess the law can’t be everywhere and people are able to relax a bit. The best.

Apart from Sodankylä, the festival itself is like gathering of a bunch of hippies or wannabe-ones. This year 27 000 ones. I really don’t consider myself the one but during the week I spend there it felt like I was becoming one. The atmosphere was the most relaxing one even the weather was the opposite. The temperature went from minus three to +23 celsius in one day! And I worked at this pub tent outside. But well, I guess, I am a Finn in the end because it wasn’t that bad. I had four shirts layered on me and I just took three of them off when hot (well, warm) and put the three back on when cold. Though I got to admit, the rain got me a bit. The one night we had to shut down before we intended to do because our tent was flooding. And I only had a one pair of shoes with me because of the inconvenience of  another trip right after this one.

For the volunteers the festival was really easy one. Meaning that you had one six hours shift per day and the rest of the day was free for you to watch films or do something else.
Something else involved quite a bit of drinking some alcohol beverages like we do in Finland. Though when consuming them on this tiny pier like this they do taste a bit better:

Some of the volunteers, I heard, saw some 20 films during the four days of the festival. I have to admit, I only saw five. I also have to admit that MSFF might be a bit too arty for my taste when it comes to the films on display. There were some of the lighter ones as well but unfortunately I was working during the showings but I don’t mind. To me the best thing at the festival wasn’t the films but the atmosphere of it all.

But a few words of the films I saw. The first one that I watched was The Unbearable Lightness of Being by Philip Kaufman who was a guest at the festival. The guy came up with the idea of the first Indiana Jones’ plot. It is still hard to believe because I also saw another film of his, The Great Northfield Minnesota Raid, and both are so so boring. There 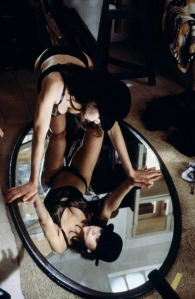 was nothing light (except some beautiful shots) in The Unbearable Lightness. And quite hot Lena Olin. But I don’t want to watch more of Philip Kaufman’s films. Especially if I have to sit on the floor like in the first one that I saw because it was sold out.

The second film I watched was karaoke (or sing a-long) version of Grease. There wasn’t anyone acting the parts which was a pity but it was good fun anyway. Pity that Finns are a bit uptight and the singing wasn’t that huge as I hoped. But in our corner of volunteers we had fun! Grease was probably also the best film that I saw during the festival.

The other two were Bella Addormentata by Marco Bellocchio, also the guest at the festival, an Italian film of euthanasia that wasn’t really sad. I liked it quite a lot. It was refreshing to watch a film about that kind of subject that is not brooding or depressing. Plus I love Italian language. The last but not the least was

Occident by Cristian Mungiu that just got to Sodankylä right before the showing of this film. I was so excited to see him live! He has, in the end, won Palme d’Or and is young and from Romania. He’s so talented. Occident was his first film they showed in Cannes and even though he’s come a long way since then, it was an entertaining piece of cinema. I’m always a fan of people dreaming of bigger things. I assume the title of the film is an indication to the situation when one is that suffocated by the ones surroundings that the one can’t breathe anymore. Figuratively speaking.

In addition to mentioned films I saw the panel of Finnish film makers discussion of the scene. What makes it, how it’s made, what is a scene and so on. It was, to me, the highlight of the program. It was very interesting to listen to the actual makers of the films how it’s done and the different opinions what exactly is a scene. Unfortunately I wasn’t able to listen the discussion to the end because my shift started. I also saw one screening of Kino Euphoria that is the short films of the film makers taking part to this workshop during and before the festival. I was quite hammered by that time (if I remember correctly the screening started at 5.15am or something like that) but I remember the second film of the bunch was really funny. The director was Italian, I think, but that’s about it. The film was about hangover. If anyone reading this could tell me the maker’s name, I would appreciate.

In conclusion, I will definitely go back. And I think everyone should visit this festival once in their life. It’s an experience that, I would imagine, one can’t see anywhere else.

All the credited photos are taken from the official site of the festival.