The Best of the Best – TV Characters

I did the list of my favourite TV series a while ago and now, after finally I finished watching House M.D. that has one of the most memorable characters in TV history, I wanted to make a list of my favourite fictional characters in television. And I want to highlight that it is the list of my favourite people, not necessarily the most iconic ones or the original ones, but the ones that I want or wanted to be at some point of my life, I wanted to marry or have sex with or at least have them as my best friends. The ones who stuck with me. The ones that made me feel tonight weirdly happy while I was trying to find suitable clips for every lovely person that has made me fall in love with them. They make me still smile.

The first of all, it was again surprisingly hard. I asked my Facebook friends to name their favourites, so I wouldn’t forget anyone and boy, how many answers I got. Some of them really great ones. I had totally forgotten Dempsey & Makepeace that I watched when I was a child, Dempsey was so hot and Makepeace so beautiful. Back in those years I also wanted to be an antique dealer because of Lovejoy. Sonny Crockett from Miami Vice was so cool and same goes for Fonzie of Happy Days too. Maddie Hayes and David Addison of Moonlighting had a great chemistry and Jeeves was (and to be honest, is more so today) so funny! Stephen Fry and Hugh Laurie are the funniest guys. And MacGyver! That man, if anybody, totally was a genius!

Even though I really liked Sex and the City, none of the ladies made it to my list but especially Samantha and Carrie are worth to mention. Same goes for Willow from Buffy and Sue Silvester of Glee. And without plastic wrapped Laura Palmer, there wouldn’t be Twin Peaks. And then there’s always a bunch of guys I probably wouldn’t want to marry but anyways have “the special contact” with, like Sawyer of Lost, Chuck Bass from Gossip Girl, Hand Moody of Californication and Eric from True Blood. I might marry The Mentalist’s Patrick Jane or Tyrion from Game of Thrones if he lived in this world. And I’d like to get to know to Sheldon Cooper, he seems to be the one that a lot of people love (I really should start watching Big Bang Theory, I probably will like it). And the list goes on and on and on because to be honest, I love almost all the characters in my favourite shows. But here we go. Spoiler warning in case you haven’t watched the shows at all or don’t know at all the big story lines.

This cutie is the cherry on the top of the best serial killer show on telly. I did debate with myself if I should choose him or Dexter. The latter is my number 11 choice and mostly because I’ve seen only first two seasons and few episodes of the third one. When it

comes to Dr Reed, I’ve watched him for eight seasons and I’m still hoping to watch a lot more (I haven’t seen the ninth season, so please, don’t spoil it to me!). What’s not to like in this character. He’s very nice looking, he’s cute but unbelievably smart and he has this sensitive side to him. There’s always something endearing in broken people. The following clip includes also Amber Heard in bikini (didn’t realise it before that it’s her) and contains a minor spoiler from season 1.

I grew up watching this. I was already so called adult but these teen never really were teens anyway. Pacey is the ultimate boy next door (well, in the series Dawson actually is but still), he’s really quite normal. Not spectacularly good-looking, not the smartest, not the one that has huge dreams or gets the most beautiful girl but in the end, he seemed to be the one that had that all and even more. Every girl should have their Pacey, so they good feel good about themselves. And hey, Pacey gets the older ladies as well:

David Duchovny is still hot (check Hank Moody) but he was hot already 20 years ago in a very fine series. Mulder was a weirdo but so handsome and interesting one that it was really hard not to like him. And the chemistry he shared with Scully! I don’t know if there’s ever been such a great thing going on in platonic relationship between a man and a woman in the history of television. Mulder was a man of my dreams in my teen years. The clip is fan vid made by Sarah.

7) Barney Stinson – How I Met Your Mother

From this on this is hard one. These seven characters got to my list straight away and it’s really hard to put them in order. I chose Barney as the last because he is the newest friend to me. And I really like Ted too. But Barney cracks me up. And he is already legen – wait for it! – dary! HIMYM is my favourite series to watch. I never get bored to it and I never get bored of Barney. And I do like my men in suits.

I first thought he would be my number one but as you can see, he’s not. Hugh Laurie is a genius. House is masterly made character and even though you can thank the writers as well but without the actor making it totally his own, it would never work. I do have a thing for smart people as you can see from my choices and House of course is on top of that bunch. He’s also good-looking and troubled. Badly. Guess it’s the bad boy meets smart that does it for me. Oh, he also has a voice you could listen forever. Btw, I right now realized that House quotes Barney in this clip:

Check my list for best series to see why everyone should like Dean (and Sam). But besides the look, he’s the bad boy with very cool car; he takes care of his brother and has a lot of meaningless sex. But he’s not afraid to cry and that breaks your heart. And he’s probably the funniest guy in television and knows his pop-culture references. And what the heck, no need to check my earlier post, here’s another reason and after that the clip where he (well, Jensen Ackles) sings Eye of the Tiger, worth to watch.

She kicks asses. A lot. She’s hot, tiny and pretty. She’s a vampire slayer in one of the best series ever made. The growing up that she makes during the series is beautiful to watch. And it’s nice that she saves the world a lot. And she also knows her pop-culture and has always a good comeback one-liner. And she’s funny. Basically the female version on Dean. I can’t enough say it but if you have not watched these series, do so.

Lorelai Gilmore is the name of both of the main characters of Gilmore Girls. Really. The mother has named her daughter after her. But I chose the mother. She’s the kind of mother I want to be. Though I’m probably too old for that. Lorelai could be the pain in the ass but she’s smart, she knows how to make your life work for you, she gets easily excited, she loves movies, she’s funny and also has those pop-culture filled speeches and snappy comebacks. I’d like to be Lorelai. She’s about everything without being too perfect. And she loves winter like I do:

Spike. William the Bloody. The best character Joss Whedon has ever created. I think I still love him. He’s the ultimate bad boy who becomes something totally else when the series go on. Again, he got the look but more importantly he owns the night. There’s just something very alluring in a cocky English accent and that long leather jacket. He’s very rock n’ roll. And he’s a vampire, they’re always hot. Oh, and he has his tunes; check the musical episode of Buffy, Once More with the Feeling, and his song “Rest in Peace”. But do watch the earlier episodes before that or you’ll get spoiled. Same goes for this clip: 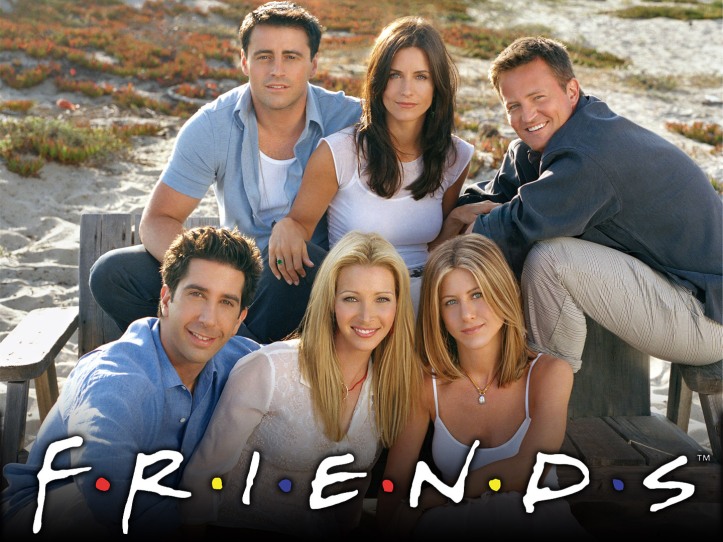 Ok, I cheated but you just can’t separate them. Without funny sarcastic Chandler there wouldn’t be the one of the realistic love stories of television between him and Monica. Without Monica there wouldn’t be lasagne for Joey. Without Joey you would never have learned how the one should ask “how you doing?” Without Joey Ross would never have understood what’s important. And without that you would not have Ross & Rachel. And without Phoebe it all might have gotten too serious. And without (my) Friends I would never have thought of having my own Thanksgiving dinner like I am going to have tomorrow for the first time. So happy Thanksgiving everyone!