Paper Towns in Paper and Film

It’s been a couple of years since I reviewed a book or books to be exact. I read way too little these days, I’ve only managed to read eight books this year. Wohoo. But one of them is another John Green novel (the last year I read Fault in Our Stars that I enjoyed a lot), called Paper Towns.

Synopsis (IMDb): “After an all night adventure, Quentin’s life-long crush, Margo, disappears, leaving behind clues that Quentin and his friends follow on the journey of a lifetime.”

John Green might be becoming one of my favourite writers alive. If he continues writing (Fault in Our Stars was released already three years ago and it’s the latest of his novels) and also develop in the way that difference between Paper Town and Fault in Our Starts shows, then he really might become my favourite. To me he is writing actual literature. The writing is beautiful even though it’s contemporary. When reading Fault, I read passages of it aloud because I thought those words were worth of hearing. Paper Towns is not that good and at the beginning it feels like that its just one of those “whatever”-kind of teen wannabe-romances but towards the end Green shows why we call him author.

What I especially like in Green’s books is the amount of quotable lines. The understanding of complexity of life and being able to put down it in words. That is something I really admire in writers. I even took photos of some of the quotes while reading. And that is a sign of a good book. That you need to capture something and think about it later. One of my favourites from Paper Towns:

What is the main problem in Paper Towns to me is the main character’s, Quentin, crush on the next-door neighbour, Margo, who is the one that puts everything in the motion. She’s obviously needed for the story but gosh, she’s annoying and it is really hard to understand Quentin’s obsession towards her. But then again, I’m not a teenager anymore, maybe it is not my place to understand. But because of her, Q as Quentin is referred, is an asshole. So she makes our protagonist effing annoying. And I hate books when I feel so turned off by the main character that I want to throw the book on the wall. Guess that is also a good sign? The character is living when I have strong emotions while reading. But it is still annoying.

Anyway. Paper Towns is average. It is much better towards the end, I even liked both, Margo and Q in the end thanks to John Green who made them realise something. I don’t know what I should say more? What should a person in general write about books? Books feel so much more personal than watching films and reviewing them. Or maybe I’m just used to do that? Let’s see:

Well. What I liked about the film Paper Towns is the use of unfamiliar names except Cara Delevingne and she’s not really known for her acting. It makes this little film a bit more real. What else did I like..? Can’t remember. It wasn’t bad. It was just totally “whatever” and definitely worse compared to the book.

What I remember is that the music was so off. Or maybe that was the point; they wanted to make the film feel different from the book? Because the music didn’t suit the mood of the book at all. It bothered me thorough the whole film. Cinematography was kind of nice, sunny and a little pastel coloured. It looks the same like the poster of the film. So, that’s in line. Oh, the character of Ben (Austin Abrams) was so much more in the film! I didn’t find him very funny in the book but in here he is kind of perfect. Yeah, he is probably the best thing in the film.

Script of the film is different from the book in reasoning. I don’t want to give out anything but that is kind of story-ruiner as the reasons of doing things in the film are just plain stupid. Plus they’re much funnier and relatable in the book. And Q’s actor or how he portraits Q is off. He’s way too lazy to be properly obsessed what he really is. Doesn’t work. And Margo is not really annoying he, so it’s hard to see why Q is. Cara Delevingne is nice, she seems cool as Margo. In a good way. 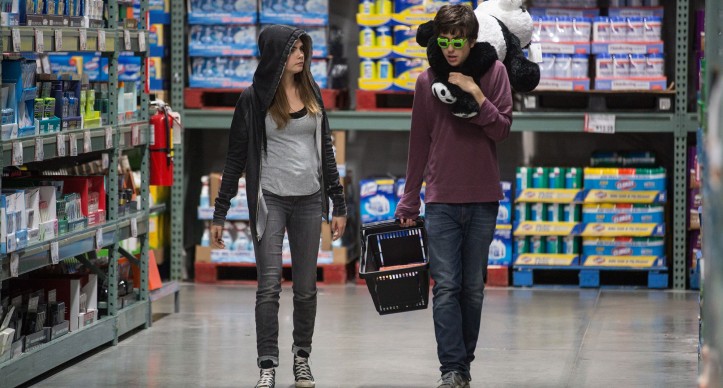 Verdict: Read the book if you feel like it. If you don’t, read Fault In Our Stars because you should, it’s very good. Watch the film if you have some spare time but I’m sure you’ll have better things to do.